Dangers in the Acropolis

The education of our children could rightly be classified as the top issue on the tidal wave of cultural debate. While reading a post that a cousin put on Facebook, I could see the undercurrents of secular humanism and the deification of man growing stronger and stronger. What’s the core cause of the decline in our educational system? Is it discipline and class control? Or is it the swelling tide of premature adulthood as teens are served with unbridled rights on a silver platter? Could it be the problem of educational disadvantage in those schools that lack quality educators or safety in the halls? I dare to say that the weakness and the decline of our education has at the root of the problem the very same subject matter we are teaching our children. As I see it, the grave dangers in our “Acropolis” (the learning centers of the day) lay in our wholesale abandon to the philosophy of life that we have come to know as the “evolutionary model of science and philosophy.”

Let’s begin by considering your typical science class in school. The danger our children are facing in our country today is the subject matter that the state and federal government now calls “science!” The teaching in our public school systems of a naturalistic model of science is not only counter enlightenment, but is also the very means that the educational system is using to stifle religious expression and thought! And, as Ken Ham has clearly stated on his blog (see this link:  http://www.answersingenesis.org/articles/2013/04/30/atheists-attack-christian-school ), some atheists are on a seek-and-destroy mission to eliminate any teaching about creation and a Biblical worldview, even in private Christian schools!

This matter will not go away and we as believers in the authority of the Scriptures need to take note of what we are already facing in the field of education. 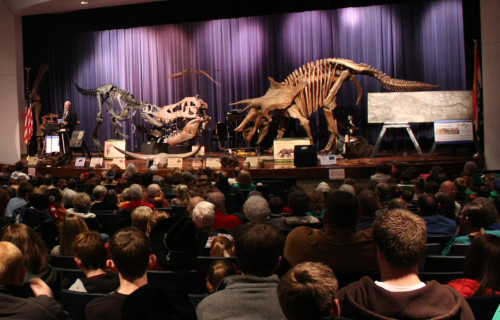 The Creation-Evolution debate. Does it belong in elementary schools?

Education, like all disciplines, leads us toward certain undeniable consequences. If I discipline my body as an athlete being meticulously careful about diet, exercise and training, I can expect, in normal circumstances, to reap a healthy and well-toned physique. If I follow a regular regimen of physical training and body strengthening, I can expect to improve my body’s stamina, strength and toning. What makes us think, then, that we as a nation can systematically and progressively inculcate the belief (and it is a religious belief, the religion of evolution) that man is highly evolved animal and then wonder why our teenage boys go out and treat young girls as if they are in pack of wolves by demanding sexual gratification? It goes with the mental and spiritual training intrinsically inherent to the evolutionary view of mankind. Animals beget animals. Spiritual human beings beget people of personal worth and dignity. Take your pick. You cannot have both!

Why do we look with bewilderment when we have, for over 50 years taught in our public high schools the philosophy of the survival of the fittest (the core of evolutionary thinking) and then observe with helplessness when a man destroys his own family through choosing to dump them for a 25 year old woman that fulfills his sexual fantasies and makes him feel more viral and manly? Do we think, that as a nation with our massive public school system that we can take the millions students and indoctrinate them with thinking that says we are the produce of evolutionary processes and then hope they have any sense of dignity and of spiritual and psychological understanding? We stack the deck against our youth by training them to think of themselves as mere “humanoids.” What goes around, comes around.

In the article link above you can see by the attitudes of those against such activity and the statements made against the action of teaching creation in a school, many are vehement opposed to teaching and promoting a Biblical worldview. Let this be a first of many warnings that must be given. Our friends and fellow citizens who choose to deny that there is even a possibility of a Divine Being who designed and orchestrated the origins of life and the formation of the universe in which we live are not our enemies. They are human beings with a rational and logical bent that they feel must be fulfilled in order to define our existence.

But that rationality and logic is limited. It is restricted by and often colored by the underlying presuppositions that mankind can explain everything and can understand everything. Such a thought process soon leads one to make major leaps of irrational ideas that cannot be sustained in a world of cause and effect or a world of physical laws. We have information that we must firmly and convincingly present to those friends who willfully reject the spiritual dimension of life. The facts are not all on the table for our evolutionary scientists and our humanistic philosophers and I believe that creation science will help bring that reality to a more balanced position.

Knowing that the struggle has only begun, let us who trust in and accept God’s written Word as the infallible and authoritative answer to man’s origins speak up now! If not, we may lose that privilege.

Este blog nace de una profunda gratitud al Autor de la vida, al eterno "YO Soy," quien me dio todo lo que tengo y lo que soy. Sin El, nada sería. Pero como no todos en el mundo han llegado a conocerle, también procuro dar una razón por la fe que tengo. Es una razón no basada en emociones ni en la intuición o el esperar algo mejor. Sino la razón está fundamenta en la verdad eterna, que no es incambiable y que es defensible, la verdad de Dios, el Creador y Sustentador de este mundo. ** Para los que se dedican a las credenciales, aquí están las de este autor, profesor, y misionero: 35 años viviendo en un país adoptivo, 39 años esposo de una misma dama, padre de 4 hijos destacados, abuelo de 4 tiernos nietos, amigo y compañero de colaboradores que han visto mis fallas y aun me llaman su amigo. ENGLISH: This blog is born of deep gratitude to the Author of life, to the eternal "I Am," who gave me everything I have and what I am. Without Him, nothing would be. But as not everyone in the world has come to know him, I also try to give a reason for the faith I have. It is a reason not based on emotions or intuition or expecting something better. But the reason is based on the eternal truth, which is not unchanging and is defensible, the truth of God, the Creator and Sustainer of this world.   ** For those who are dedicated to credentials, here are those of this author, profesor, and missionary: 35 years living in an adoptive country, 39 years husband of the same lady, father of 4 outstanding children, grandfather of 4 sweet grandchildren, friend and partner of collaborators who have seen my failures and still call me their friend.
View all posts by David Rogers, Magister en Artes →
This entry was posted in Evaluating our Christian Culture and tagged biblical worldview, creation, education, evolution, humanism, indoctrination, secularism. Bookmark the permalink.

2 Responses to Dangers in the Acropolis

This site uses Akismet to reduce spam. Learn how your comment data is processed.